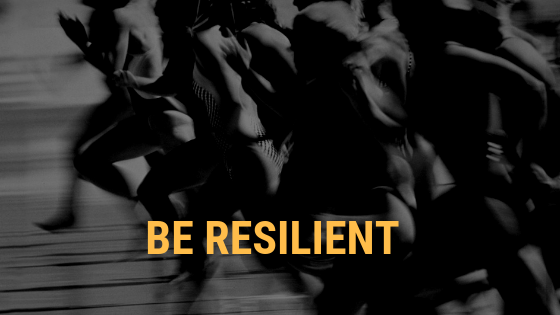 Be Resilient: Don’t Stay Down When You Fall

Resilience is your ability to recover quickly from some temporary difficulties or challenges. It expresses how tough you are. To be resilient means you are able to bounce back from setback or loss and achieve success at the end. Resilient people are also regarded as “comeback kid” because of their propensity to overcome downturns and rebound to victory.

I am fascinated by “comeback stories” especially in sports and politics. Bill Clinton was tagged a comeback Kid after coming second in the 1992 New Hampshire Democratic primary election. He had earlier lost the first in the nation, Iowa caucus and was down about 20-point heading into New Hampshire primary. He needed to come in 2nd or 3rd, otherwise his campaign will be over. The New Hampshire second place finish gave him the opportunity to resurrect his campaign and he went on to win the Democratic party presidential nomination and subsequently landed him the highest office in the land.

In the sport’s arena, there have been many teams that showed resilience and rebound after being down initially. For example, after over 86 years without a win in the World Series title, the Boston Red Sox had their comeback to become the 2004 World Series Champion. They had been trailing in the bottom of the ninth and facing elimination in Game 4, but the team showed resilient by fighting hard and breaking the over eight decades of championship drought to capture the Series title. I cannot also forget in a hurry how the Nigeria soccer team snatched victory from the jaws of defeat to lift the Olympic cup in Atlanta in 1996. The Nigeria team was down 2 goals to 1 and with just about sixteen minutes left to finish the game, all hope seemed lost. The Nigerian team was counted out and It was almost like a David versus Goliath encounter. Most people have given up on the Nigerian team and the Argentines were already looking forward to lifting the much-coveted Olympic cup. The Nigerian team was down but not out, they were knocked down, but did not stay down. They kept fighting, playing with all their strengths, and very soon they recovered, caught up and eventually won the tournament.

It’s November and there is just one month to end the year. Are you down and almost at a point of giving up? Has life thrown you a curve ball and your plans not going as expected? Are you confused, and you don’t feel your goals are achievable because the end of the year is near? Just like the Nigeria team, don’t give up just yet. You can catch up, overtake and become victorious if you keep the right perspectives. There are still more than fifty days left in the year and you can use those days to get back on track. At the end of the year even if your plans did not materialize as expected, you can still look yourself in the mirror and be proud if you have given it your best shot. Above all, you can stay resilient by using the opportunity that the new year provides to start again.

“You may have to fight a battle more than once to win it.”