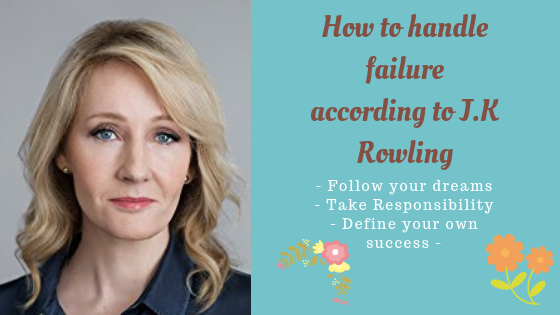 How to respond to failure according to JK Rowling

Joanne K Rowling know something about failure because that was exactly the way she described herself after she became jobless with broken marriage. She however turned that failure into success and today she has become an authority in her domain, a well-respected woman, author, speaker and a philanthropist. There are definitely many things we can all learn from her. About two decades ago, Joanne Rowling, was an unemployed single mother who depended on welfare benefits, so she could take care of her 1-year-old daughter. She was clinically depressed and she contemplated suicide on different occasions. According to her, she was a failure.

Fast forward many years later, JK Rowling has become a renowned bestselling author who have sold over 500 million copies of Harry Potter series, making it the all-time bestselling book series. She found huge success as an author. It was not a meteoric rise to fame for her as over 12 publishers rejected her novel before the 13th one took a chance on her.

In her 2008 commencement speech at Harvard University, she shared several lessons on benefits of failure and the importance of imaginations to live a successful life. Here are some important lessons from her speech. These lessons can help you handle life’s disappointment and setbacks as you move forward in your own path.

Success is never guaranteed. Most people wrongly assume that successful people find it easy in life. The story of JK Rowling is an evidence to proof otherwise. She was unable to get a publisher to accept any of her first twelve books, given that circumstance, most people would have given up on the second or third trial. She persevered and persisted towards her dream life and she achieved success at the end. Success can come to you if you are willing to put in the effort and work hard at what you do. If you can take a chance on yourself and explore the limitless possibilities that life brings to you, it may take some time, but you will be able to find your own path if you don’t give up.